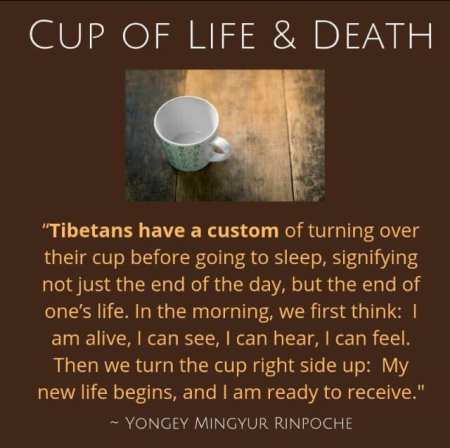 At the beginning of an intensive journal writing session, we turn a cup right side up to signify that we are beginning all over again.

Founded in 1914, Daiyo is a 4th generation family business of candlemakers who are based in Shiga prefecture, Japan. There are 2 types of fires, says the company: Hinoe and Hinoto. Hinoe, the elder brother fire, and Hinoto, the younger brother fire, live without hierarchy but in a Yin-Yang relationship. The elder brother fire is like the flame of a burning sun. It is wild and must be handled with care. The younger brother fire is much smaller and can be handled with our hands. Fire has been with mankind for longer than history and have offered comfort in many shapes and forms.

“To light a candle is to share the stories in our lives and to establish new relationships.” – DAIYO 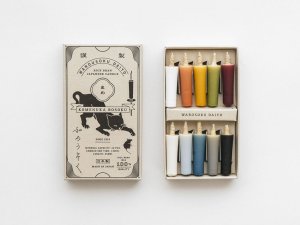 These fun tiny candles are handmade from natural rice wax. Because they’re virtually free of contaminants, the candles burn for 15 minutes with almost no smoke or drippage. Unlike typical candles that are made from hydrocarbons (or fossil fuels), these are environmentally friendly and perfect for indoor use.

The cat & mouse packaging design pays homage to the history of candle-makers in Japan, who have always made candles from vegetable wax. The natural wax attracts mice so candle-makers always had a cat around; a pet that was also a guardian.

Use a tiny candle it for your daily meditation, as a timer for taking breaks, a timer to write an intensive journal entry or simply to relax.

Renowned choreographer, Twyla Tharp endorses the importance of establishing creative habits. Bancroft Manor is a virtual workspace for artists and writers alike. It offers a safe haven where creativity flourishes. An extension of the Soul Food Cafe Bancroft Manor provides a base for creative people seeking a rich assortment of reminders, routines, visual activities and writing prompts.

The Manor provides a space for people to ritually come to, a place where they can make it their daily practice to work on artistic projects.

At the end of each session of a Lived Experience, Memoir Writing course I do set homework and have the expectation that participants will come ready to share a piece at the next session. At a recent session where we undertook a memory building exercise that can be done repeatedly, I asked participants to set aside 20 minutes each day for the following week and come ready to share what they had achieved as they established a solid habit.

You’re my knight in shimmering armour. Did you know that?’
‘I think you mean shining.’
‘No shimmering. You shimmer, and you glow.’

What’s Eating Gilbert Grape was a movie I often showed senior students back in the day. It is beautifully told and, in my mind remains one of DiCaprio’s finest performances.

A prisoner of his dysfunctional family’s broken dreams in tiny Endora, IA, Gilbert (Depp) serves as breadwinner and caretaker for his mother and siblings following his father’s suicide and his older brother’s defection. Momma (Darlene Cates) is a morbidly obese shut-in who hasn’t left the house in seven years; her children include Arnie (DiCaprio), who’s about to turn 18 despite a host of negative medical forecasts, and terminally embarrassed Ellen (Mary Kate Schellhardt), who is emerging from awkward adolescence.

When he’s not taking care of the difficult but tender Arnie, Gilbert spends his time fixing up the family’s tattered farmhouse, working at a failing mom-and-pop grocery store and hanging with local misfits Bobby (Crispin Glover), an overly ambitious junior undertaker, and Tucker (John C. Reilly), a handyman who hankers after a job at the new burger franchise.

Into this complicated but essentially unchanging social universe steps Becky (Juliette Lewis), a thoughtful young woman who’s been escorting her nomadic grandmother from state to state in a mobile-home caravan. As Becky teaches Gilbert to finally consider his own happiness for a change, she disrupts both his family obligations and his long-running affair with a lonely housewife (Mary Steenburgen).

Gilbert’s life, his future, is thwarted. He was not able to let go until …..

This 1993 classic is available for free online or with SBS in Australia.

Grab your notebook. Make sure you have some wine and nibbles you enjoy. Settle down to really see this movie and make notes about what really is eating Gilbert. Take particular notice of Ellen and Amy and the everyday chores they are engaged in. As memories of your own teenage years rise up don’t let them escape. Make sure to capture these by writing them down. Make lists of random thoughts and memories of lived experiences! Consider the things that have bound you, the things you have not been able to let go of, sibling rivalry and memories of young love.

Museums today are more than familiar cultural institutions and showplaces of accumulated objects; they are the sites of interaction between personal and collective identities, between memory and history.
Susan Crane

“I created this small museum to remember them, so people can see it and we can remind ourselves that our loved ones were here once.”

Between 1947 and 1971, the border village of Hundarman Broq in the district of Kargil, was located in Pakistan’s territory. But when the dust settled after a seven-day war in 1971, the village was incorporated into India. The result of the war was that those who had been in Pakistan at the time remained Pakistani citizens, while those who had stayed in the village became Indian citizens overnight, with no way to cross the borders. For years, many villagers from Hundarman Broq have been separated from their families, with no way to see them again.

To grapple with this reality, one man, Mohd Ilyas Ansari, has taken it upon himself to create Hundarman Broq’s Museum of Memories, which encompasses the objects left behind by the villagers who never returned home to this small border town. The museum is a way for Ansari—and the rest of the villagers who still remain in this ghost village—to remember all the divided families that still exist in India and Pakistan, and offer younger generations a way to know their ancestors.

“They are objects of everyday life in the female world and are extraordinary because they tell micro-stories and biographies of the inhabitants of the city who tried to escape the eruption,” said Pompeii’s general director, Massimo Osanna, in a statement.

It is believed that these tiny amulets were used to bring fortune and fertility, and protect against bad luck. There is no doubt that when they found these items at Pompeii they found a treasure trove of items, each of which has a powerful story to tell.

When le Enchanteur led travellers into Lemuria she gave them a special bag filled with talismans, each with a specific purpose and urged recipients to take great care of their bags as they journeyed deep into this mysterious land. In my classes, I reveal the power of my little red suitcase to draw out memories and I have encouraged participants to create creative medicine boxes and bags and fill them with precious objects.

In my most recent course participants bought along with them, boxes containing precious items. We used these to kick start writing. A simple House Captain’s Badge, an old photograph taken at an orphanage in India induced a flow of words.  As Osanna, Pompeii’s director, says in this ArtNet article, “objects of everyday life… tell micro-stories and biographies”. Certainly, the same lamp that stood by my bed when I was a child brings back memories of the room in that house that I shared with my sister, of the doorway that led into what had been a nursemaid’s quarters, a storeroom where I spent solitary hours playing.

Designate a notebook where you sketch or include photographs of memory-filled items. Allow a memory-filled item to take you on the wings of time and travel back to the past. Simply make random notes. This notebook is only a repository that you may turn to when you want to begin writing, so you do not need to adhere to rules of grammar or even construct sentences. Later you can zoom in on a word or phrase and begin to write.

I remember the first day I walked into the classroom. I thought I was in heaven, all those books and so much to learn. I was like a sponge, thirsty for knowledge. I loved school from before I even started and could easily have been a professional student.
D Forster

Whether it’s Wordsworth recalling his schooldays in The Prelude, or Shakespeare’s Jaques describing the schoolboy ‘creeping like snail / Unwillingly to school’, poets have often written about school, whether fondly or critically, from the teacher’s or the pupil’s perspective.

Those who were fortunate enough to have lived before the digital age would remember a completely different time where life was lived in a simple way and time passed by in a calmer manner than it does now. ‘The good old days’ is a favourite topic of conversation for many who remember their childhood before the age of television and mobile phones.

For over twenty years I have been providing creative stimuli for free. Small donations to help keep my sites free of annoying pop-ups and corporate advertising would be appreciated. You can subscribe and gain lifetime membership of Bancroft Manor via PayPal. My account is heatherblakey@fastmail.fm. Membership entitles you to join a closed Bancroft Manor Facebook Group, work collaboratively with me on projects like Danse Macabre, increase your readership, gain access to other members and more stimuli than you will know what to do with.