Edgar Allen Poe’s story ‘The Tell-Tale Heart’, like ‘The Woman With Hair of Gold’, as told by Pinkola Estes, tells us much about the toxic nature of secrets. Both the dismembered heart and the golden hair of the murdered woman tell their tale and eventually bring about justice.

In Chapter 13 of Women Who Run With Wolves Pinkola Estes not only spells out just how secrets can slay us but also provides tangible ways of opening the secrets.

In Lived Experience Narrative Workshops we talk about ‘airing the dirty linen’. To ‘launder’ we undertake a body scan that involves listening to what the heart and other parts of the body have to say about secrets that long to be released. Then we work with mandala templates of hearts, colouring and noting scars and secrets that are seeking to be released from the lock proof places where they have been stored. Once secrets have been identified we focus on one and write a stream of consciousness for twenty minutes. We share what we are able to share and the homework is to develop the piece further. 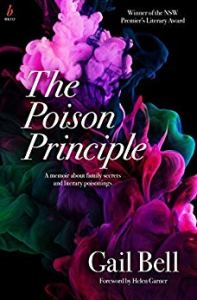 From experience, I know that this can lead to some exciting, incredibly diverse projects. Perhaps Australian author, Gail Bell, began like this. She is one author who has been willing to bring into the sharp light of day shocking family secrets.

I am currently listening to an audio recording of her award-winning book. The dust jacket outlines the basic story for us. “When Dr William Macbeth poisoned two of his sons in 1927, his wife and sister hid the murders in the intensely private realm of family secrets. Macbeth behaved as if he were immune to consequences and avoided detection and punishment.

Or did he? Secrets can be as corrosive as poison, and as time passed, the story haunted and divided his descendants. His granddaughter, Gail Bell, spent ten years reading the literature of poisoning in order to understand Macbeth’s life. Herself a chemist, she listened for echoes in the great cases of the nineteenth century, in myths, fiction, and poison lore.

Intricate, elegant, and beautifully realised, The Poison Principle is a masterful book about family secrets and literary poisonings.”

For over twenty years I have been providing creative stimuli for free. Small donations, via PayPal, to help keep my sites free of annoying pop-ups and corporate advertising would be appreciated.