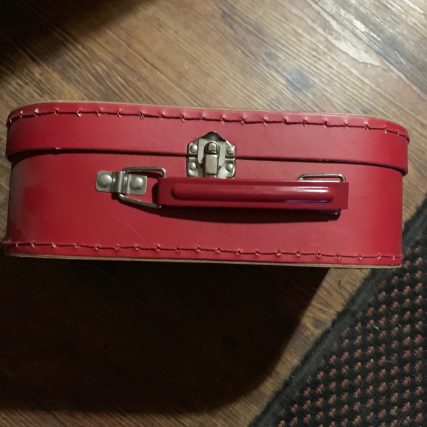 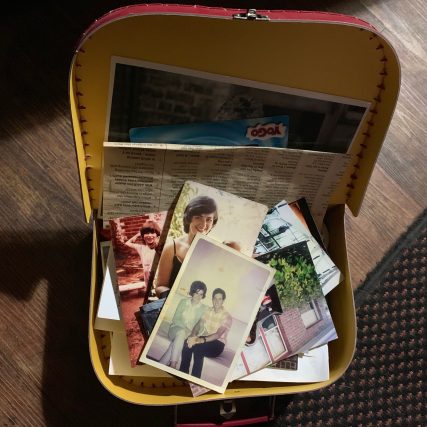 Having shown the group my little red suitcase, filled with a lot of photos and ephemera that was on my fridge in the house I left two years after my husband’s death, I asked them to bring along a case or a shoebox full of bits and pieces. We will randomly draw something out, spend some time closely examining the photo or item, dig deep into the well of memory and write freely for twenty minutes.

Mirabai Starr and Natalie Goldberg have documented guidelines for this kind of writing.

“The most important things are the hardest things to say. They are the things you get ashamed of because words diminish them–words shrink things that seemed limitless when they were in your head to no more than living size when they’re brought out. But it’s more than that, isn’t it? The most important things lie too close to wherever your secret heart is buried, like landmarks to a treasure your enemies would love to steal away. And you may make revelations that cost you dearly only to have people look at you in a funny way, not understanding what you’ve said at all, or why you thought it was so important that you almost cried while you were saying it. That’s the worst, I think. When the secret stays locked within not for want of a teller but for want of an understanding ear.”
The Body by Stephen King 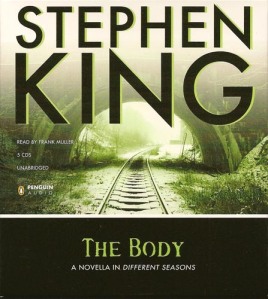 Participants who join one of my Lived Experience Narrative courses are responsive when I stress that we are not going to try to begin at the beginning. Instead, I make it very clear that to begin we will work with a number of prompts, build up a collection of material and then, piece it together like a jigsaw puzzle.

As a facilitator who effectively draws material from people, I am rather fond of leaning on techniques used by literary giants. There is little dispute that Stephen King is a literary master who has the power to help us break open the lock.

The opening of his novella ‘The Body’ captures the reader’s attention immediately. He begins, what has been regarded as a piece of autobiographical work, by alluding to the perils of keeping secrets locked away. Then, when he writes  “I was twelve going on thirteen when I first saw a dead human being. It happened in 1960, a long time ago… although sometimes it doesn’t seem that long to me” we are taken to a pivotal time. 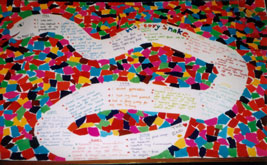 With this strategy in mind, I encourage participants to identify pivotal times. One way of doing this is by ‘making descansos’ or by creating ‘hisstory snakes’ and then choosing a moment to flesh out in more detail.

One participant who was compiling a biography about her mother talked about her being banished from her small community to go to Melbourne to have her illegitimate child. She talked about her standing on the railway station platform, suitcase in hand, ready to leave her family and the small country town she had grown up in. I suggested she begin by having her pack her suitcase ready to go.

Another woman began to tell the story of her uncle by beginning with the moment the ship carrying soldiers back from World War 1 docked at the Melbourne port.

Both these pieces had their origins in making descansos. Another strategy is to take a look in a rear vision mirror.

Autoethnography is a form of qualitative research in which an author uses self-reflection and writing to explore anecdotal and personal experience and connect this autobiographical story to wider cultural, political, and social meanings and understandings.

One way to get into writing about your lived experience is to begin by writing about something as simple as the story of your life as a writer. When you tackle this task write creatively, focusing on as many concrete events as you can. Give your story a beginning, middle and an ending. Make your story interesting rather than telling about it in ‘this happened, then this’ fashion. Make sure to include memories of childhood and adolescent writing experience.

Here are some questions to consider as you begin to work.

Do you remember being taught how to write?
What principles were you taught?
By whom?
Where did you write?
Do you recall any products of your early writing experiences?
What made you like or dislike writing?
When you write now, how do you feel?
What emotions circulate through your body?
Do you feel as if you are a subjectively or emotionally different person when you are writing? Characterize these differences?
Is writing a rational, emotional or spiritual experience for you? Explain or specify.
Do you feel compelled to write or do you avoid writing as much as possible?
Describe the best and worst writing experiences of your life. What made each memorable? How do you write?
Where do you write these days?
Is writing integrated into your daily routines?
Do you write every day or only when you must?
What are your work habits as a writer? How do you get started?
From what sources do you draw inspiration to write?
How many drafts do you typically write?
Do you write with the door open or closed?
In restaurants, bars, or coffee shops?
What is your ideal writing environment?
How do you organize your space for writing?
With whom do you share what you write?
What are your revising or rewriting habits or patterns?
Do you have someone to rely on as an editor, critic or writing buddy?
How do you know when you have finished writing a particular piece?
Do you act “professional” as a writer?
What does “acting professional as a writer” mean to you?
What forms of writing are you engaged in, e.g, poetry, journalism, short stories, memoir? Which do you enjoy most? Why?
What are your hopes and aspirations as a writer?
What are your fears and apprehensions?
What kind of future do you envision as a writer?
What would you like to accomplish?
What will you need to do to achieve this goal?
What obstacles are in the way of your writing?
To what extent do you get distracted by social media, e-mail, text messaging and phone calls?
How can these distractions be overcome?
Do your family members and/or friends understand the importance of writing to you?
Are you able to keep them from disturbing you while you are working?